Home › Millrose Games › If Millrose were a college meet…

If Millrose were a college meet…

Note: James Chu, who runs for North Brooklyn Runners, was our interview guest on Episode 4.

NCAA track & field features the most thrilling and competitive races in the sport that we love. Collegians race not for a paycheck, but because they care about the glory and love of sport and competition. For that, and the tremendous depth and parity in the college ranks, I am a huge fan of NCAA Cross Country and Track & Field.

As a Princeton University track alum myself, I have a rooting interest in the sport. Princeton is not exactly known as a powerhouse in the major sports of football, baseball, or basketball (save for the occasional March tourney berth), but Princeton has fine programs in Cross Country and Track & Field, turning out a few professional runners in recent years. When I saw the start lists for the 109th Millrose Games, I got excited as I saw quite a few Princeton alums and two current students on the lists. I decided that I wanted to see how many representatives from each college were in the meet, and while I was at it, I scored the meet NCAA Championship style by college alma mater of the participants. 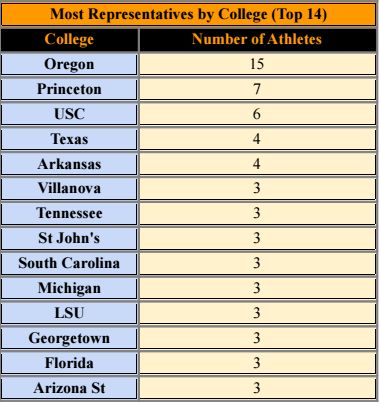 As expected, University of Oregon dominated the athlete count with 15. Princeton had the second most representatives with 7 including Olympian Donn Cabral (3000m), Liz Costello (5000m), Greta Feldman (5000m), Justin Frick (high jump), Joe Stilin (mile), and current students Noah Kauppila (800m) and Garrett O’Toole (800m). If you throw in incoming future frosh Conor Lundy (HS mile), the Tigers would have 8 representatives. For this, I use the orange and black as my title and column header colors.

I will use the green and gold of Oregon for the team scores, as their superior numbers and dominating performances take the wins for both men and women. The men’s competition actually came down to the last event of the meet, the Wanamaker Mile. Oregon trailed USC (with wins from Andre DeGrasse in the 60 meters and Duane Solomon in the 800) by 7.5 points. Oregon had three guys in the mile (Matt Centrowitz, Blake Haney, and Daniel Winn), needing to collect at least 8 points collectively to win. Haney got one point (8th place), so Centrowitz needed at least 7 points (2nd place) for the team win, and he got 10. Six points (3rd) or fewer would not have been enough.

The MVP of the men’s competition can go to none other than the greatest athlete in the world Ashton Eaton of Oregon. Eaton scored 8 pts in the 60m hurdles and 4 pts in the long jump for 12 of Oregon’s 32 points.

The women’s MVP goes to Shannon Rowbury for winning the Women’s Wanamaker Mile tallying 10 of Duke’s 15 points for a 3rd place finish in the women’s team standings. 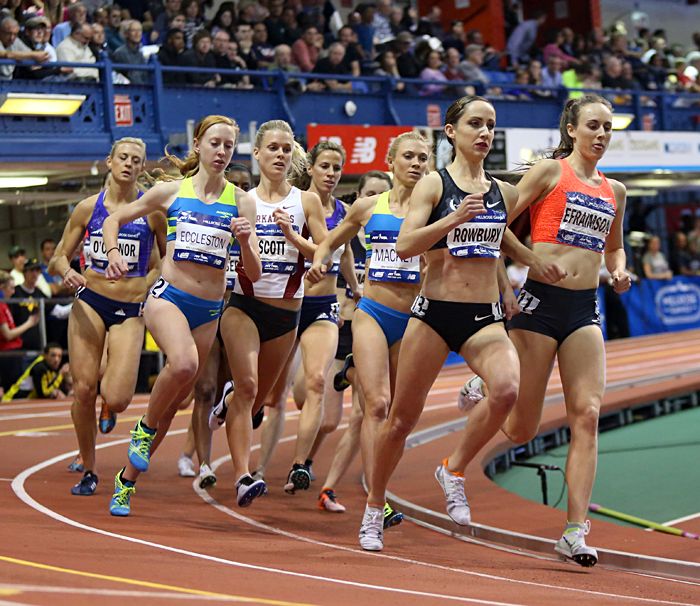 My Tigers finished with 5 points coming from the current Tigers Kauppila and O’Toole in the 800.