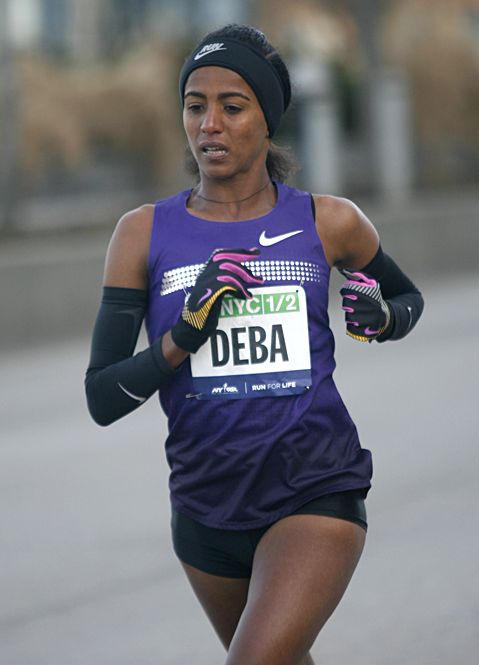 Buzunesh Deba was our guest on episode 24.

C259: We want to get right to your amazing performance in Boston. Let’s start with the first half of the race. Shalane Flanagan set a very fast pace. How were you feeling about that pace?

Buzu: I was happy because that pace would help us to run our best times.

C259: Later in the race, as it moved on into the hills, at Heartbreak Hill and mile 23, at two spots you fell  off the lead a bit, in fact you were fifth for awhile but were able to recover quickly. What were you thinking about?

Buzu: On the hill mile 23 I felt a pain. Then I got back, thank God I recovered quickly and did my best.

C259: It was very impressive. Often in a marathon late when we see people fall back, they never get back into the race, so when you finished second that was fantastic, really a great recovery. On the last straightaway, did you think at all about breaking 2:20, when you saw the finish line clock?

Buzu: Yes, that pace was so fast, and I thought I can do under 2:20. If I had not felt the pain, I might have done more.

C259: Very impressive to slip under there. Let’s talk about the New York City marathon, where you’ve also had great races. In 2011, you and Firehiwot Dado caught up to Mary Keitany in Central Park. When you did that, did you think you would win that race?

Buzu: Yes, at the 2011 NYC Marathon I was in good shape and I was supposed to win. After I arrived in Central Park, I felt pain and my pace was dropped. The same in 2013, I lost my energy after I arrived at Central Park. It was windy and at mile 18, I was cramped.

C259: It was very windy. Most of that race, the wind was in the runners’ faces. A lot of people had disappointing times, but you still had a great race and finished a strong second.

Buzu: Yes, thanks to God.

C259: Do you plan on running the New York City Marathon again this year?

Buzu: Yes. Of course New York is my home town, I will do my best.

C259: On the New York City marathon course, where are most of your fans? In the Bronx, where you live?

C259: You will certainly be among the favorites to win it, with your amazing Boston performance and being so close twice before. Do you plan on running races prior to running the NYC Marathon?

Buzu: Only shorter distances, the 10k and a half marathon.

C259: When you were a young runner, which runners have inspired you the most, and why?

Buzu: (Laughter) Of course one day!

C259: Those are great role models to have.

Buzu: Yes, I love her very much.

C259: You’ve raced some great Kenyans in the marathon, including Mary Keitany, and Priscah and Rita Jeptoo. Who do you think is the most difficult to beat?

Buzu: The three of them are very difficult, and one day we will win them!

C259: One day you’ll beat them. Well, both Priscah and Rita Jeptoo had great finishes to their races. Is that something that you can train for in New York, to have a really strong finish?

Buzu: Yes, 30 miles is our usual training. Sometimes we do more than that, 50 kilometers.

C259: Fifty kilometers, wow. We also heard that when you do those runs, Worku can’t keep up with you. Is that true? Even though he’s very fast?

C259: That’s terrific. And a lot of that is in Van Cortlandt Park, right?

Buzu: Yes, all the time I am doing training with my husband, Worku only. But in 2013, I did with Tigist Tufa, the three of us ran together.

C259: She was the woman who was running with you in the New York Marathon, correct?

C259: We looked back at your results on the New York Road Runners page, and we saw that you used to run with the Westchester Track Club and the West Side Runners, and you did a 5k back in 2008, the Coogan’s race, and your time was 17:22, which is faster than what Gregg and I could run, but a slower pace per mile than your marathon pace, which is 42k, not 5k. How have you improved so much?

Buzu: In 2008 I was just returning to running after being injured. Recently, I have been doing very hard training and improving my times.

Buzu: No. The same thing.

C259: Do you lift weights, or do strength training besides running?

Buzu: No, I never did weights. I do gymnastics to keep the body straight.

C259: And what is your favorite workout on the track?

Buzu: I love all my workouts. If I don’t I’m going to lose.

C259: That’s a very good way to look at it. Love all your workouts. Buzu, you are such a fantastic runner, and I know that before Boston in the U.S. all of the attention was on Shalane Flanagan and whether she would win. We’re hoping that you get U.S. citizenship and run for the U.S. to give us another great shot at the Olympics. Is that in your plans? Is there a chance you’ll run the U.S. Olympic Trials in 2016?

Buzu: I am more than happy if I can run for the U.S. Olympic Trials, more than that I [would be] very happy to run for the Olympics representing my beloved country and bring gold for the U.S., but I do not have legal papers to do so yet. I am applying for citizenship.

C259: It would be fantastic to see you running for the U.S. Our show Cloud259 is committed to getting runners (including us) to run our personal best times in the marathon. What is your single most important tip or advice for improving?

Buzu: Generally runners should not lose hope. They have to work hard and stick to their goals. Marathon runners must do training at least twice a day, morning and afternoon. Anybody who works hard can do anything with success.

Buzu: And don’t give up, and more than training, pray, they have to pray.

C259: It takes prayers to get through the finish line sometimes.

C259: Don’t give up in your training, but also don’t give up during the race as well. As you showed in Boston, you can get dropped but then come back.

C259: Buzu, thanks so much for joining us. It’s an honor having a sub 2:20 runner and a woman of your stature. Hopefully you’ll be running with a U.S. flag sometime soon, but we’ll certainly be cheering for you for New York in your fifth NYC Marathon and hopefully your first win. Good luck to you.

Buzu: Thank you so much.