With a lap to go in the men’s 5,000m at the Adidas Grand Prix on Saturday, Ben True‘s eyes widened as if he were in the cockpit of the Millennium Falcon with coordinates aligned to punch it to hyperdrive. True was shoulder to shoulder with the leader in a tight pack of six runners. He had triumphed in faster 5,000m races, but not on this stage and against this caliber of competition (he finished fourth at the meet in 2013, running 13:16 as Hagos Gebrhiwet prevailed in 13:10). 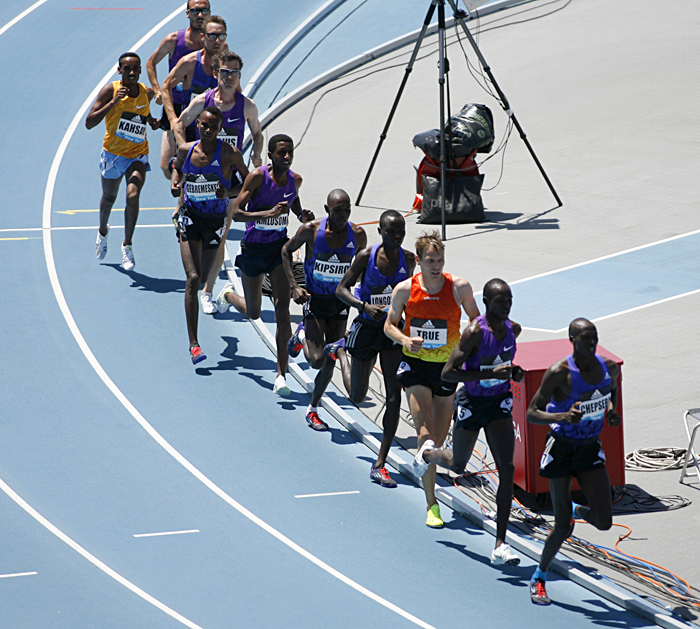 Given the race’s methodical pace, it was clear that True would have a kick, but so too would Olympic 1500m silver medalist Nick Willis, who, with 200m to go, slingshot from sixth to first in a matter of 10 seconds. There weren’t many seconds to go after that. “When I came up to the lead I thought Thomas Longosiwa was going to kick again, but once I passed him I thought I had it. I figured all the other guys I had already passed. But that’s a long straightaway into a bit of wind.” Willis said after the race.

“I had doubts, yeah.” said True. “On that straightaway I moved out to lane 3 and I just really pushed hard. I realized I wasn’t losing more, I was starting to gain, and when you have that little bit of positive feedback, that you are closing a little bit, mentally you get such a big gain that you can really go for it.” True won in 13:29, beating Willis by three tenths of a second. “I can’t let a 1500 meter runner win a 5k,” he laughed. 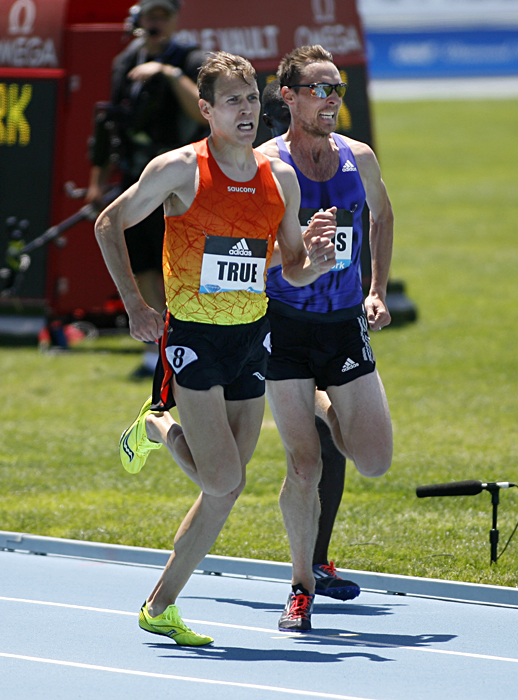 For a 1500 meter runner, Willis has dabbled quite a bit in the 5,000m. He has raised his training volume with an eye to the future at both distances. “I still think the 1500 is the event I have the best chance of medals. Perhaps I’ll consider giving the 5k a go as a more concerted effort after this Olympic cycle. At the moment it’s just used as a mechanism to keep me accountable to the high mileage training. My shortest runs have been 90 minutes the last three months. Weekly mileage is 95, I run six days a week. It has taught me how to strengthen my legs to cope with running rounds as well. At the last few championships my legs have been pretty sore after the semifinals. Doing 150s or 100 meter strides after long runs is a good way to toughen up the muscles.”

The media scrum around Ajee Wilson after her victory in the women’s 800 was thicker than it had been in past meets. The 21-year-old, who appeared on the cover of the event program, finally seems to be getting her due. Wilson likes to keep it simple. Her goal for this race was to win, and she did, in 1:58.83,  dispatching the field by over half a second. 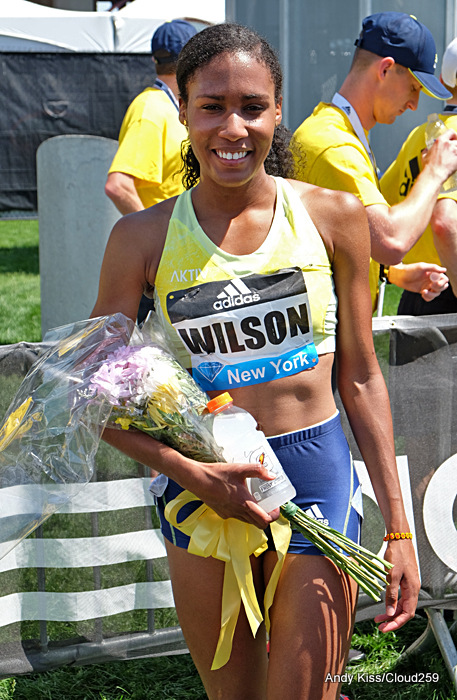 At Friday’s press conference, David Rudisha stated his goal was to run a world leading time. Check. His 1:43.58 clipped the prior 2015 best, Ayanleh Soulieman’s 1:43.78, and bested his own winning time from last year by over a second. The men’s 800 meter race was the most fashionable of the lot, with Duane Solomon matching his orange Saucony singlet with an orange bandana and orange-tinted glasses, while French 800 meter ace Pierre-Ambroise Bosse ran in a white Henley collared tee-shirt equally suitable for tennis. 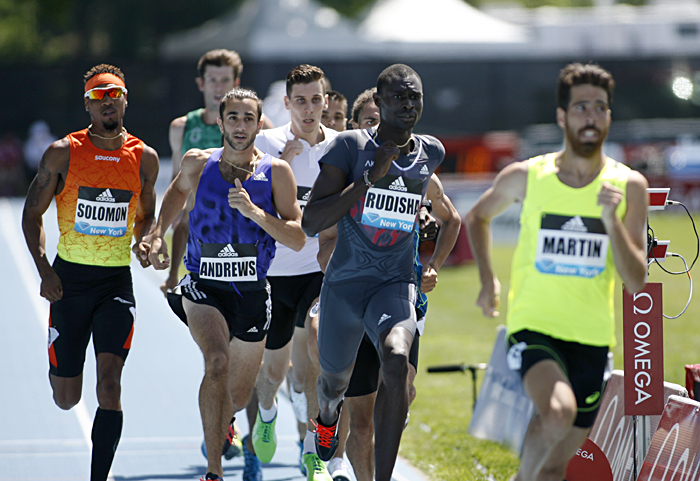 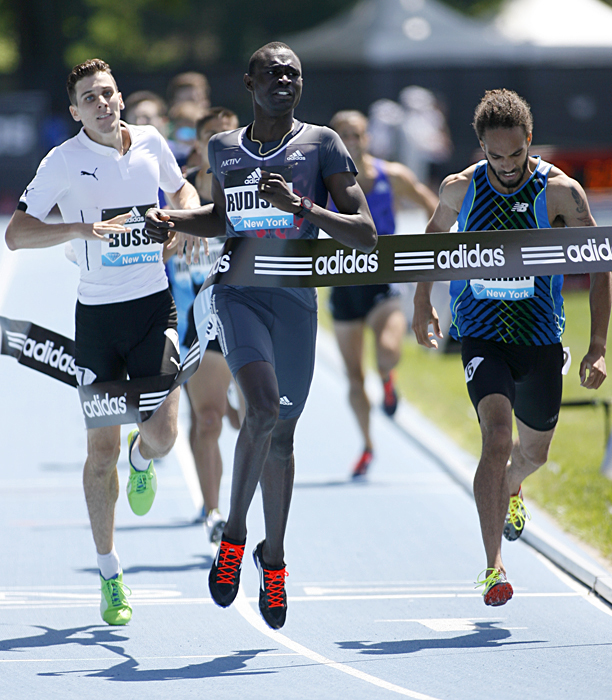 What was an off year for Rudisha last year was a year off for Usain Bolt, and the difference showed. Bolt stated at the presser on Friday that his goal was to run sub 20 and that one of his remaining career goals is to go sub 19. Bolt’s narrow victory in 20.29 into a -2.9 m/s headwind wasn’t quite what he was hoping for. The Jamaican legend was upstaged by the 19.58 that 20-year-old Canadian Andre De Grasse ran Friday at the NCAA championships (wind was +2.4 m/s for De Grasse). Bolt is 28, Justin Gatlin 33. 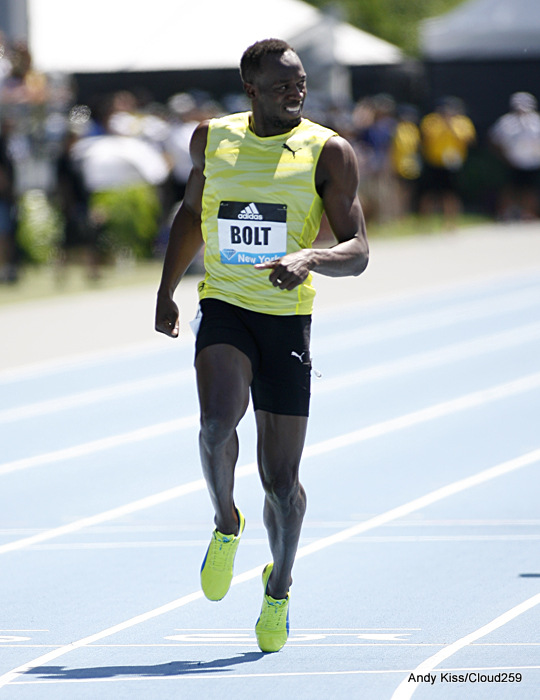 In her blog entry on June 30, 2013, Olympic steeplechaser Bridget Franek wrote that “I’ve decided to hang up the spikes temporarily and take an extended break from the sport.” Two years later Franek is once again thinking about the Olympics, this time with a different mindset. “I want to make the team in 2016. Right now I’m running with the motivation of using this talent that I’ve been given and this opportunity that I’ve been given to travel and to compete and to get into some of these big meets as a way to do something bigger. I want to get more involved in communities and reach out a little more and use running as a platform for social change. It’s not just about me any more.” Franek finished sixth in the 3000m steeplechase on Saturday, running 9:36, slicing 11 seconds off her time from the Birmingham Diamond League meet a week ago. 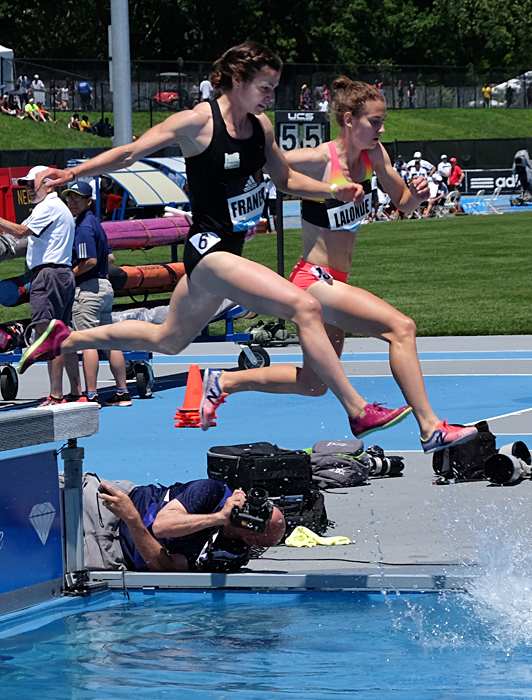 Another runner making a splash on the comeback trail was 2008 Olympian Erin Donohue, the surprise winner in the women’s 1000. Nike Oregon Project’s Treniere Moser doubled back from the 800 and gave a spirited chase for second. “We decided a couple of days ago that the double would be best for my future,” said Moser. “When the idea was put to the table I’m like, that sounds so painful, but I’m glad I did it.” When asked to comment on the recent controversy surrounding coach Alberto Salazar, Moser said “[t]he coaches have done a great job of putting it all on them. At the end of the day we know our job is to go out there and perform. They’ve been really good about making sure we stay focused and not letting the distractions take over.” 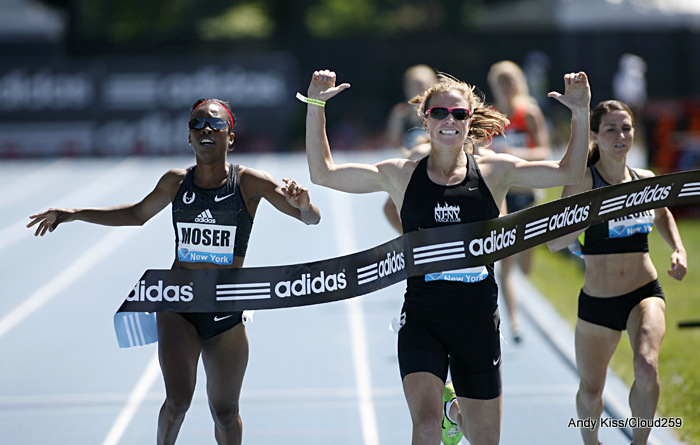 All photos by Andy Kiss. See our full photo gallery of the Adidas Grand Prix.