From a distance, the eighth victory for Jenny Simpson and fifth for Nick Willis at the NYRR Fifth Avenue Mile on Sunday would hardly qualify as a surprise, but given the relative age of the competitors and the way the races played out, it was all a bit shocking. Witnessing it was like seeing a favorite band play at its best; in running terms, it had a touch of the magic of Des Linden and Yuki Kawauchi’s joint victory at the Boston Marathon.

Jenny Simpson was a clear favorite in her race but was joined at the hip the entire way by Elinor Purrier. It is almost unheard of to see two leaders side- by-side from gun to tape. “It feels like woman to woman combat,” Simpson said. 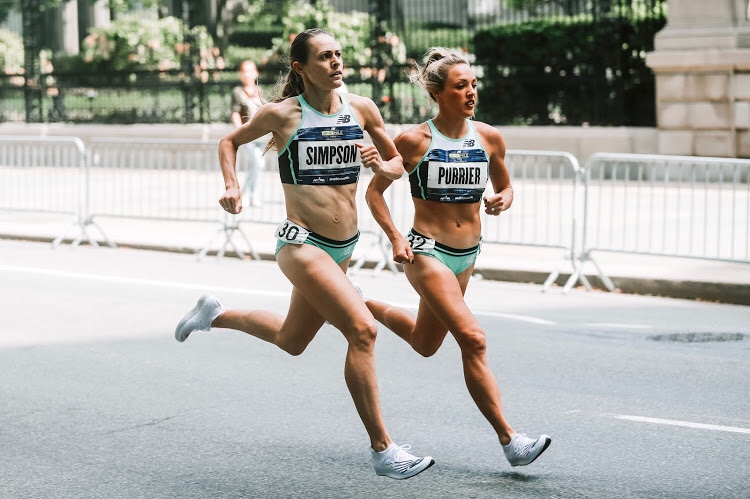 Racing in identical New Balance uniforms and technical shoes (NB 5280s), they actually were a study in contrasts. At 33, Simpson was the oldest runner in the field. Since graduating in 2009 from the University of Colorado, she’s been America’s best miler for the greater part of a decade, collecting World Championship gold and Olympic bronze. She’s made a habit of capping her season by winning at 5th Avenue.

Purrier, 24, graduated in 2018 from the University of New Hampshire. She broke through this year with bronze medals in the 2-mile at the US Indoor Championship and in the 5000m at the Outdoor Championships.

Purrier is a smooth runner, and her late-race surges made the longer-limbed, muscular Simpson appear relatively strained.

“You can see the finish line from really long ways away. It’s different mentally from a track when you know exactly what one lap feels like,” Purrier said. “I definitely was digging deeper and deeper as the race moved on.”

She didn’t have any doubts. “I don’t now if I necessarily deserve the level of confidence I have when I come here, but from halfway to the finish, I really always believe I can win it.” 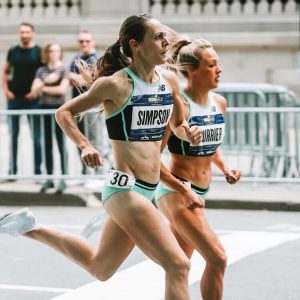 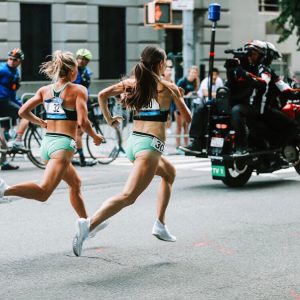 Both women raised their arms at the tape, but Simpson had edged ahead in the last fifty meters. Their times of 4:16.1 and 4:16.2 were the two fastest ever.

Though older than her competitors, Simpson had nothing on two-time Olympic medalist Nick Willis, who at 36 was running against 18 twentysomethings. Professional runners often move up in distance as they age—Willis’ one-time rival Bernard Lagat has had remarkable success in his 40s at the marathon. Over the past several years Willis has dabbled in the 5000m, but two disappointing races this year at that distance sent him back to the 1500m, where he has been gapped in Diamond League races.

The competition in this one was not as fierce as in the Diamond League, which feature the absolute fastest runners in the world, but it still featured 3:49 miler Ed Cheserek and 3:50 miler Sam Prakel, among other hotshot millenials.

With about 300 meters to go, Chirs O’Hare launched an extended kick. Willis thought he was in the catbird seat. “I thought I was going to win,” Willis said, “because I was feeling really good and I was sitting behind the person who I thought was my main person to worry about, Morgan McDonald the Australian. He ran a 3:54 looking effortless just four days ago. O’Hare’s had a tough season and he often ties up the last 50 meters.”

“Suddenly when Sam Prakel went past Morgan and Morgan didn’t start going after Chris, I thought gosh I’ve got to cover Sam’s move,” said Willis. “Then Chris didn’t tie up, he kept going. So I was like oh gosh, I’ve gotta somehow dig deeper than I normally have to. In this race I don’t normally have to go to the [bottom of the] well. I can sort of enjoy the last fifty meters a bit, but it wasn’t so much like that today.” 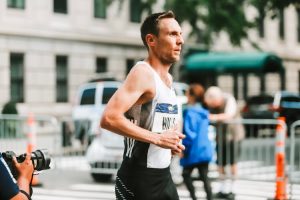 While Willis may have sensed what was going on, from beyond the finish line, spectators had no idea he was in the hunt until the very end, when he suddenly appeared on the side of the road leaning for the tape. It wasn’t instantly clear which runner had won, though the slow-mo replay give it to Willis without a doubt. He and O’Hare both ran 3:51.7.

Perhaps it gave new hope to a runner who next year will be striving for his fourth Olympic Games. “What’s made [this year] the toughest is that I’m the healthiest I’ve ever been, but I’m running a lot slower than I have the rest of my career. It’s harder for me to forget my age,” he said.

“I’m 36 now, I’m twice the age of Jacob Ingebrigtsen, probably the second-best miler in the world. I’m at least seven years older than the rest of my competitors, but my training has been going as well as it ever has.”  — Brenn Jones

All photos by John Le Tran