At the races: Diamond League NYC 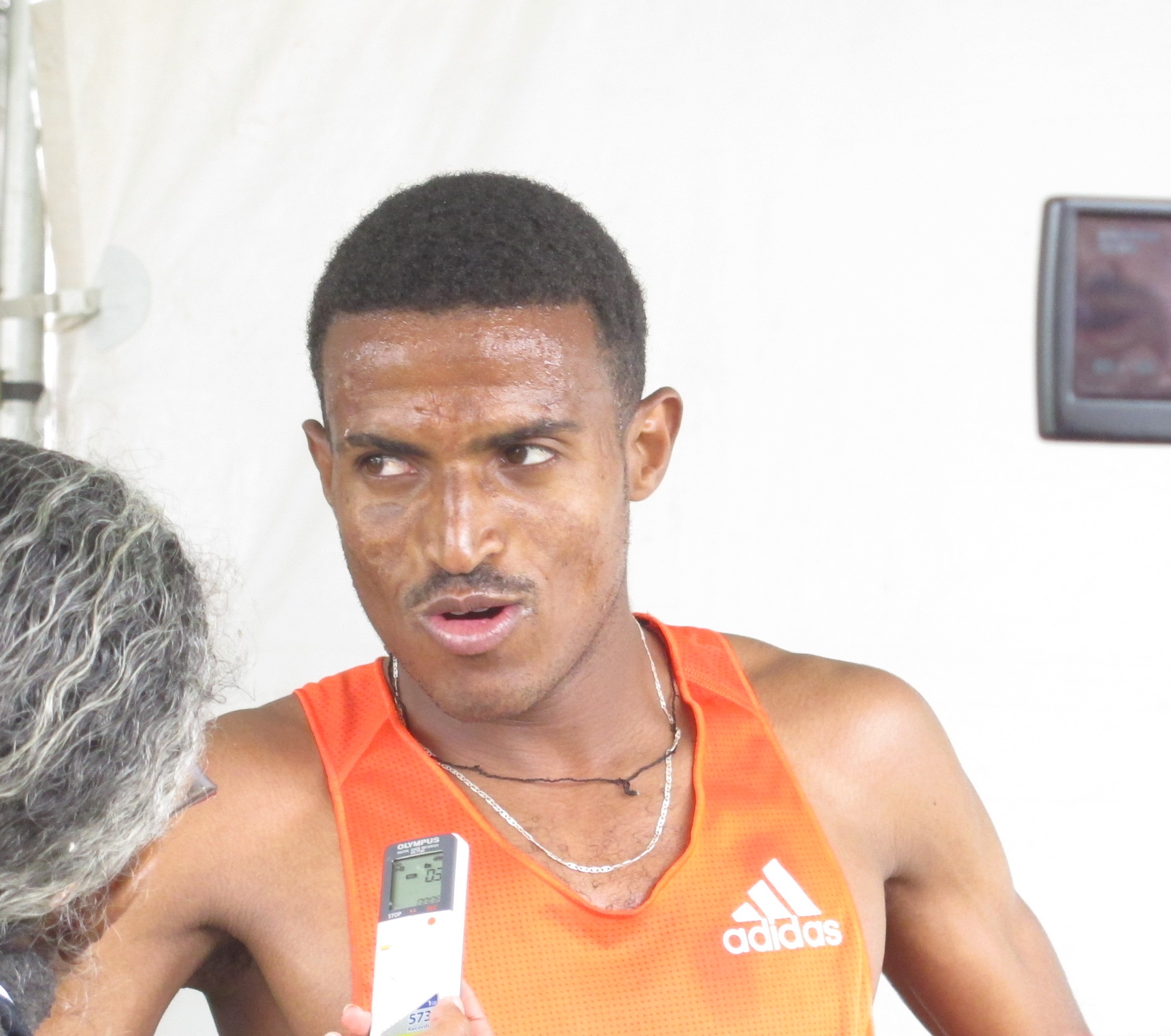 When the women’s 400m runners knelt into their blocks at the adidas Grand Prix Diamond League meet on Saturday, there was a vacancy in lane 4 where Sanya Richards-Ross, a late scratch, was supposed to be. It seemed cruelly unfair that the fans who were shivering in the wind and rain were denied this attraction, at a meet already handicapped by a number of absences. In the 5,000m, Americans Galen Rupp and Bernard Lagat and Olympic bronze medalist Thomas Longosiwa from Kenya, along with a flotilla of other Nike athletes, were keeping their powder dry for next week’s Prefontaine Classic. Even a specially placed pole-vault runway beside the final straightaway was unused due to the wind and rain. But if the inclement weather and thin fields precluded Olympian high drama, the meet did offer glimpses of the fastest men and women on earth, including a 19-year old who could already be the world’s best long distance track runner: Ethiopia’s Hagos Gebrhiwet.

At last year’s Diamond League meet in NYC, David Rudisha ran the fastest 800m ever in the U.S. with a 1:41.74. The time was less astonishing than the gap of nearly three seconds he had on the field. Rudisha again won handily on Saturday, even if by half the margin, but it was Gebrhiwet who made the statement of the meet.

Gebrhiwet clobbered the field in the 5,000m, winning with a world-leading time of 13:10 as top contender Dejen Gebremeskel (6th, 13:31) faded badly. The 5,000m is often decided by a sprint kick, but Gebrhiwet broke the field early and the drama was actually in the race for third, as American Ben True, who had steadily moved up through the field as Gebremeskel dropped back, dueled with Ethiopia’s Ibrahim Jeilan. Though True (13:16) could not reel Jelian in, he bolstered his credentials with the strong race in tough conditions, and he’s clearly the top American threat to the U.S. Nike-sponsored runners in the 5000m and 10,000m (True is sponsored by Saucony). True will likely run the 10,000 at US Nationals. 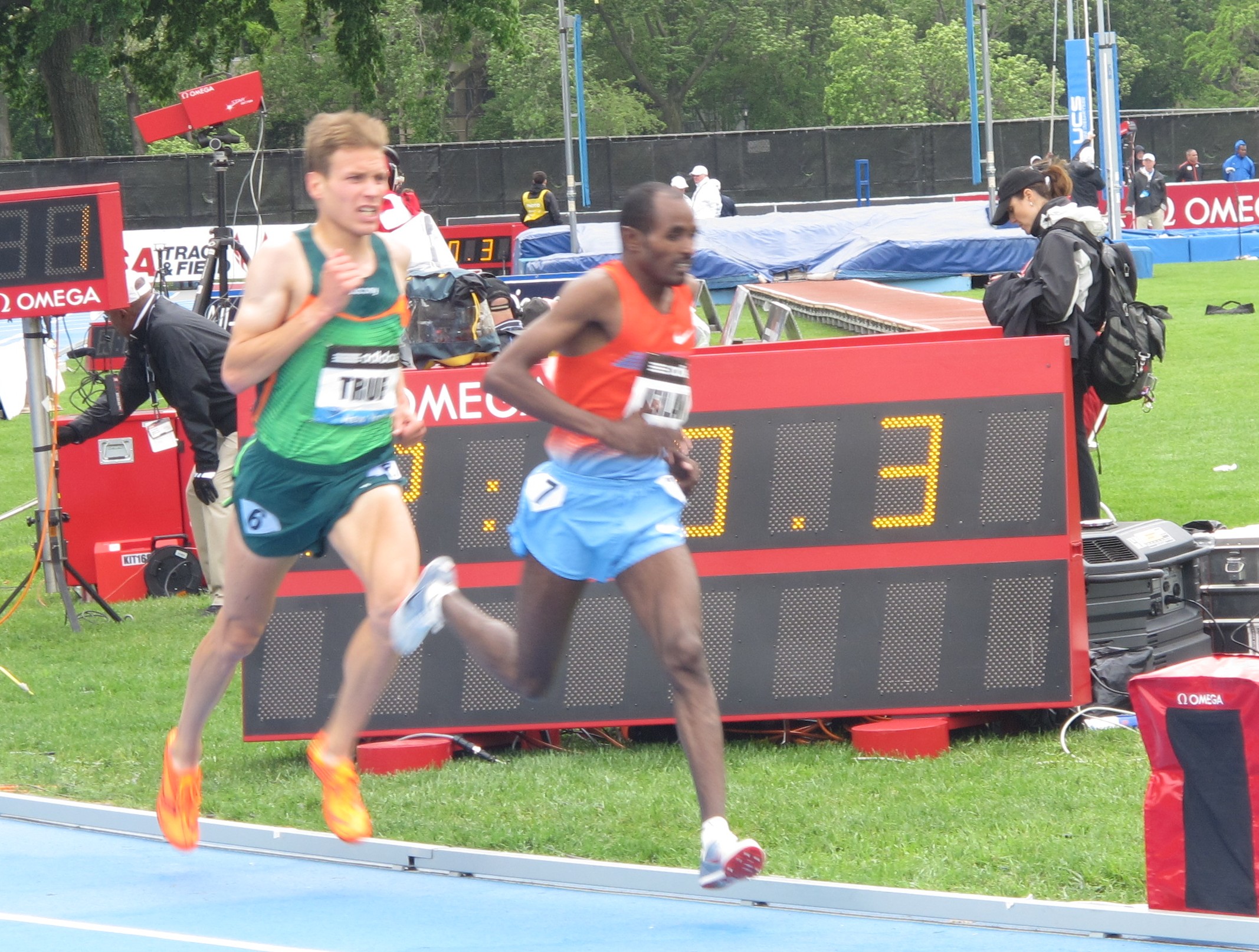 The women’s 1500 featured a huge field of 19 runners, including pace setters, jostling for position. 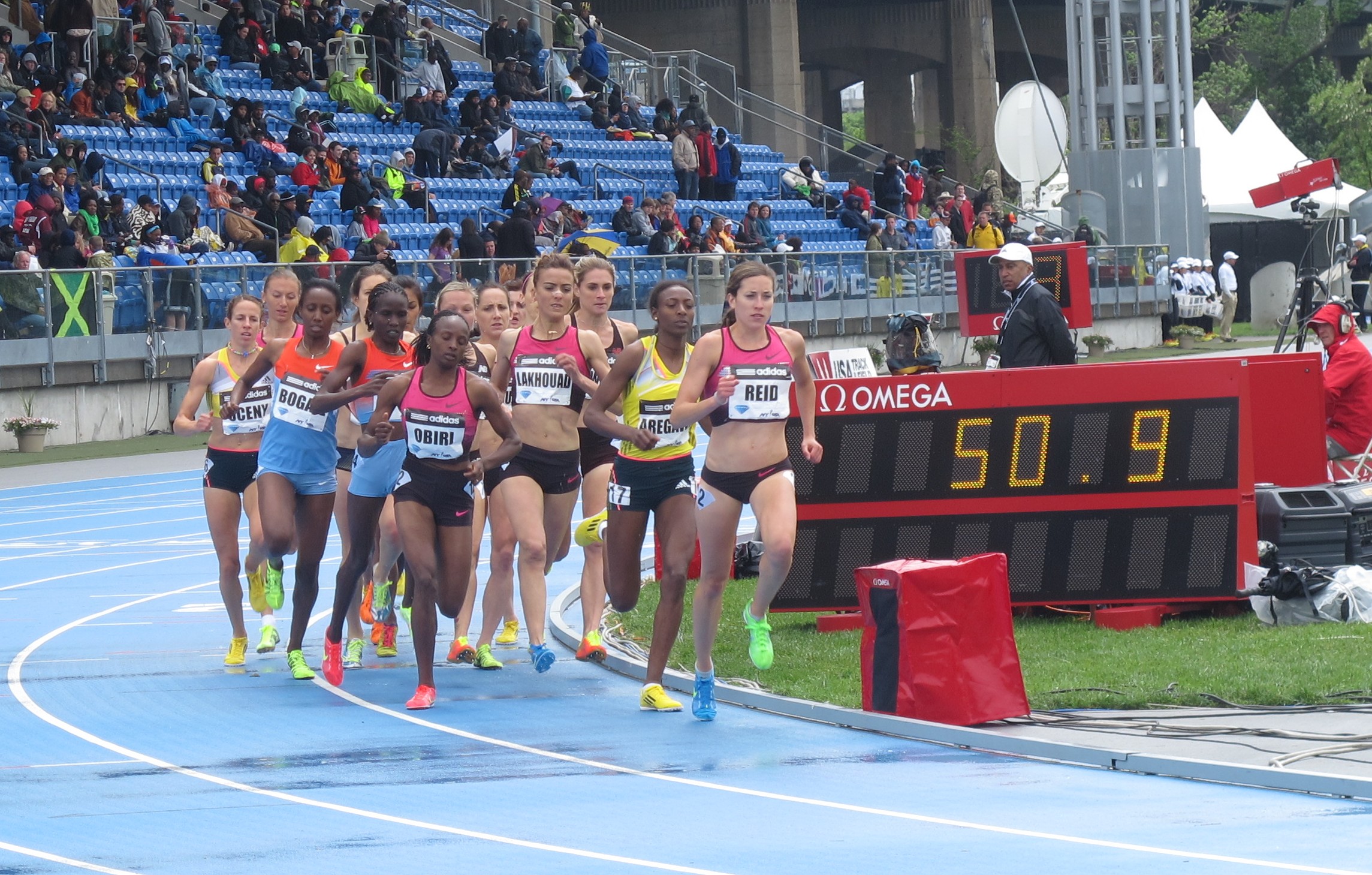 and there they go (final lap) 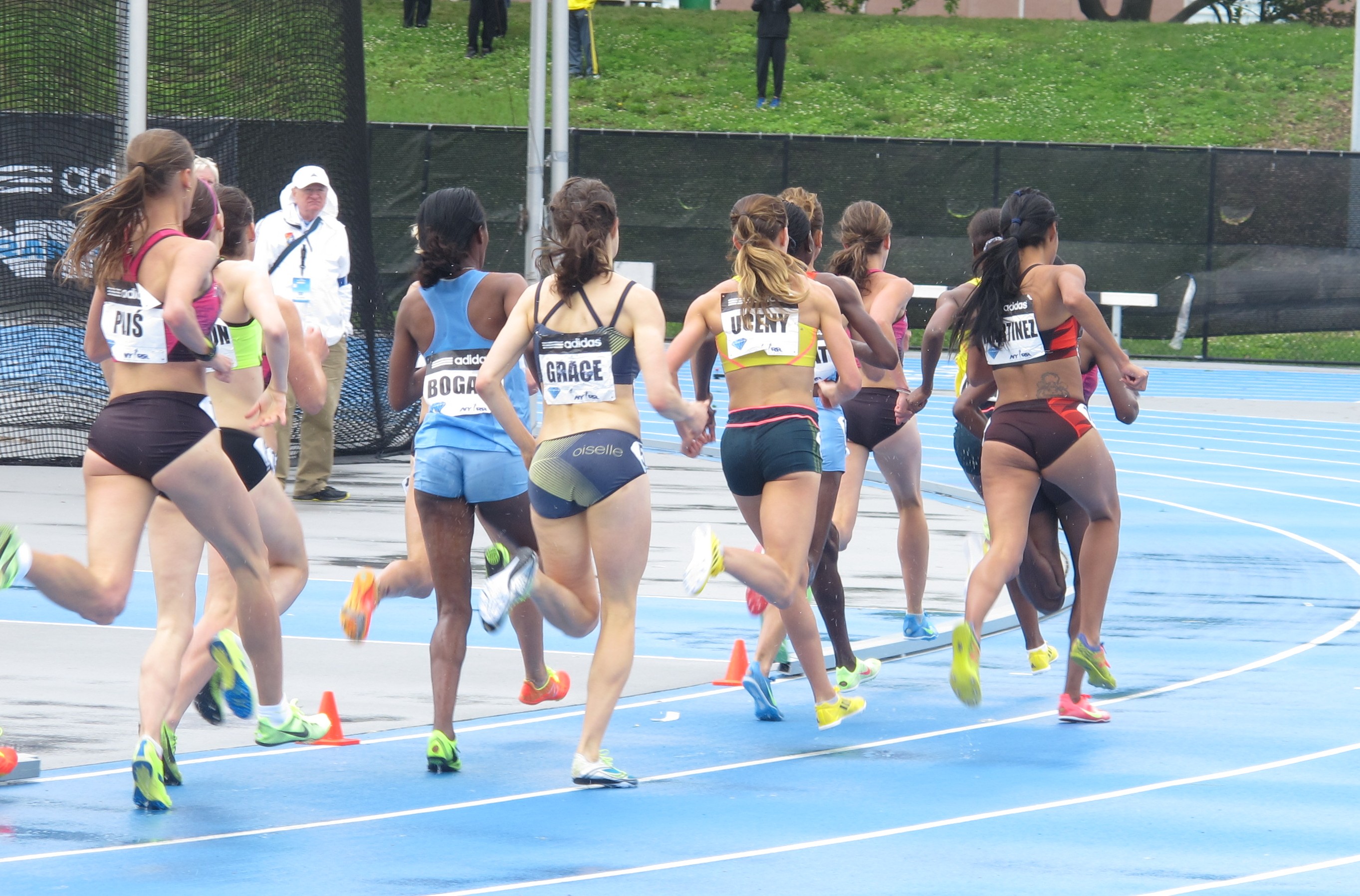 Predictably, as Kate Grace (8th, 4:08.92) noted about her first Diamond League race, there was a lot of pushing and shoving. It was no surprise that Brenda Martinez (3rd, 4:06.25) was the top American runner, finishing strong after hanging back at the start. Morgan Uceny (7th, 4:08.49) sliced 9 seconds off her Drake performance. She said after the race that unlike at Drake, she “felt like herself” and that she stayed off the rail to stay out of trouble. After falls in the Olympics and World Champs over the past two years, Uceny is fated to always be cognizant of this issue. The winner of the race was Sweden’s Abeba Aregawi, who like Gebrhiwet, has a commanding early season lead in the “Diamond Race” standings with two wins in two competitions (the Diamond Race is the cumulative result of 7 competitions over the course of the season). 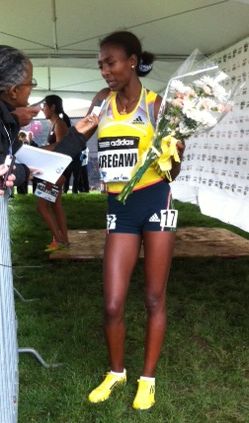 Flowers for the winner

Elsewhere in the meet, Amantle Montsho ran an impressive 400, 49.91 in far worse conditions than her 49.88 from Doha. Youth was on display with a pair of stellar dream mile races, and the return of Blanka Vlasic to the high jump brought the shutterbugs to their feet. The high jumpers were a sight: impossibly tall and thin, they approached the bar in their warmups like a basketball team completing a layup drill in slow motion. Vlasic was particularly vocal, like a team captain, though she seemed often to be barking at herself. 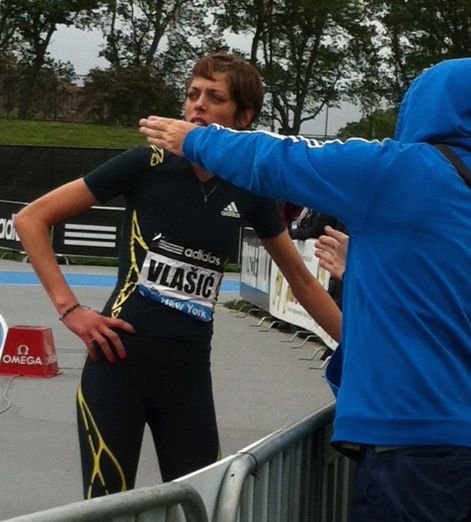 The one race for which the sun shined uninterrupted was the master’s men’s 75+ 100m dash, won by William Bittner in 14.69. Bittner scored one for the elders, outpacing the Fastest Kids for the boys (Xavier Donaldson, 15.42) and girls (Adaria Reaves, 15.32). 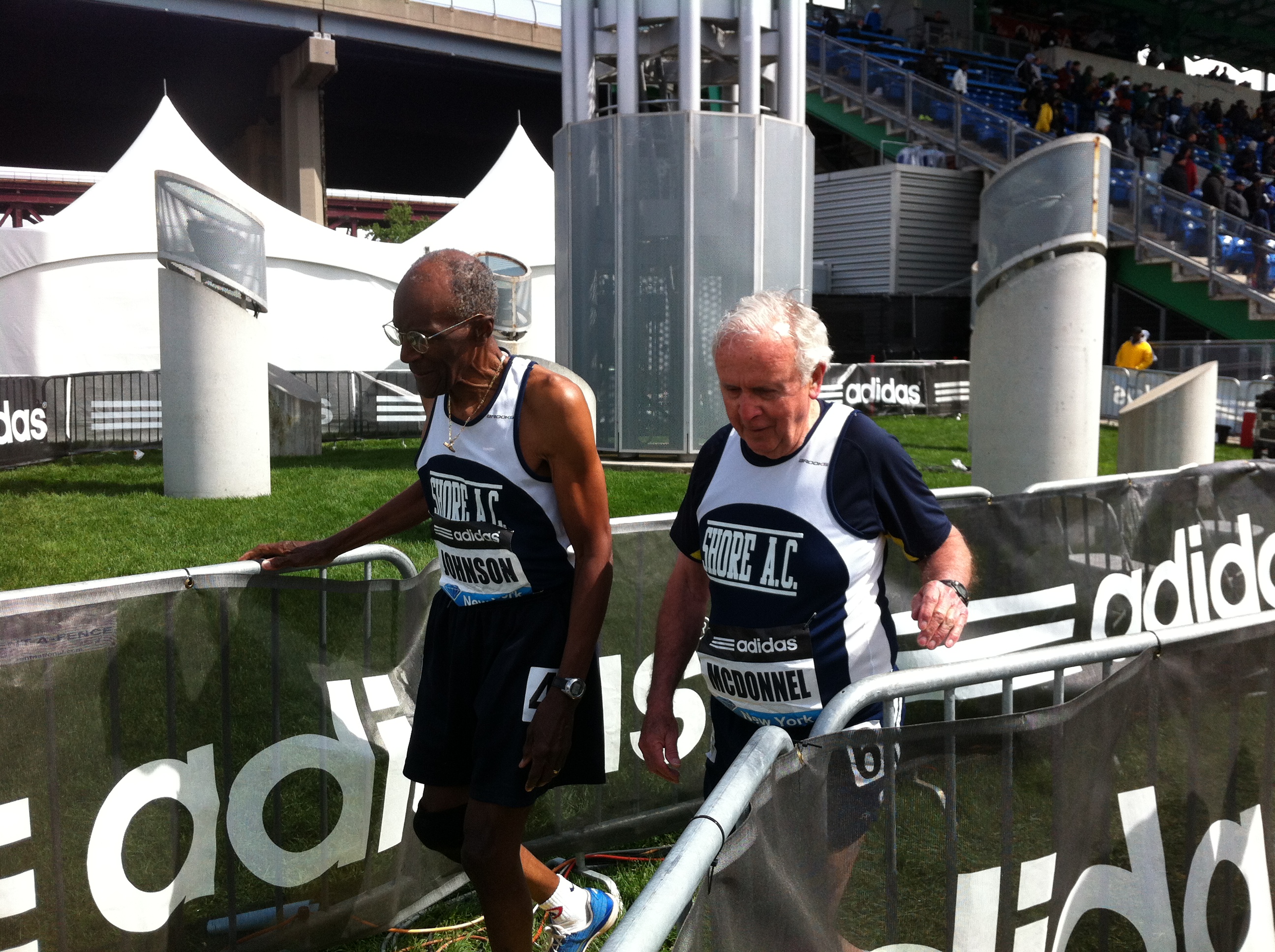