As Cam Levins limbered up for the 2-mile race at the Armory Track Invitational on Saturday, it was easy to take pity on him. A half hour earlier Levins had bounced mile specialist Chris O’Hare, 3:54.74 to 3:57.26. Now standing beside him on the start line was a fresh Galen Rupp. 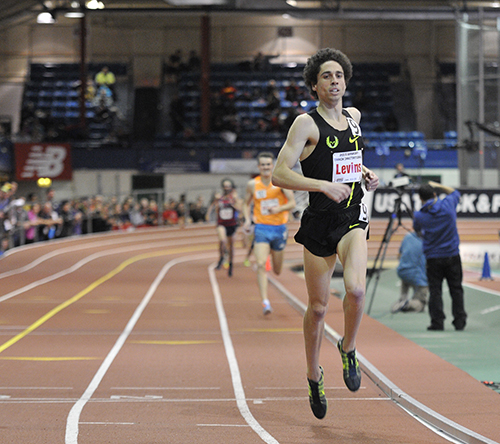 Cam Levins wins the mile at the Armory Invitational.

The Nike Oregon Project is well known for its post-race workouts, but this was a race, not a workout. Had Levins been there to pace Rupp, it would have been insulting, as Levins had just destroyed a 3:52 miler. And if he was there truly to race Rupp, well, he wasn’t being given much time to savor his mile victory, was he? Levins’ 2-mile PR is the Canadian record 8:14.69, Rupp’s is the American record 8:07.41, after which Rupp did a 5 x mile workout, finishing in 4:01. Levins being sent back to double against Rupp would be like Rupp being sent back to double against a fresh Mo Farah. Best of luck. 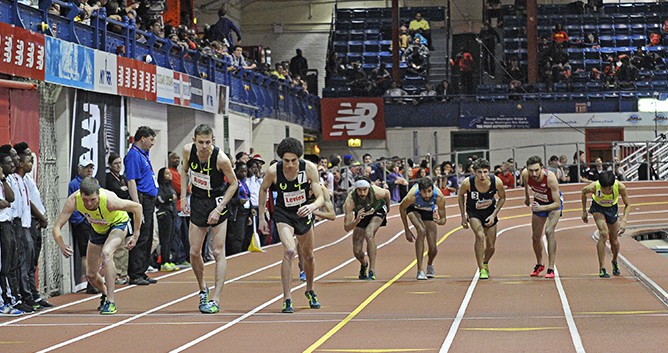 As Darth Vader’s theme music from the Empire Strikes Back filled the arena, Levins and Rupp, in their black NOP singlets, shadowed pacer Trevor Dunbar for the first half of the race. With three laps to go, to the surprise of nobody, Rupp swung wide and took the lead.

Levins stuck to Rupp, and the gap to Ben Blankenship in third was about five meters with two laps to go. Then things got weird. Blankenship surprisingly closed the gap, and with slightly over 100 meters to go made a move to pass them both just at the moment when Levins, unaware of Blankenship, powered around Rupp and into the clear. Blankenship ran by Rupp, dodged a lapped runner, momentarily lost his balance, and stepped on the infield. Japan’s Sugura Osako chased down Blankenship for 2nd. Levins, astoundingly, had won again, by a clear margin no less. Understudy, no more.

Levins and Rupp are both scheduled the run the 5,000m on the same track at the Millrose Games on Feb. 14, Valentine’s Day.

Preceding Levins’ heroics was an impressively routine victory by his NOP teammate Jordan Hasay in the women’s 2-mile. When Hasay made her move with 300 meters to go, nobody could match her kick, and that was that. Abbey D’Agostino, who had gotten the best of Hasay in the latter stages of their college careers, was a scratch. 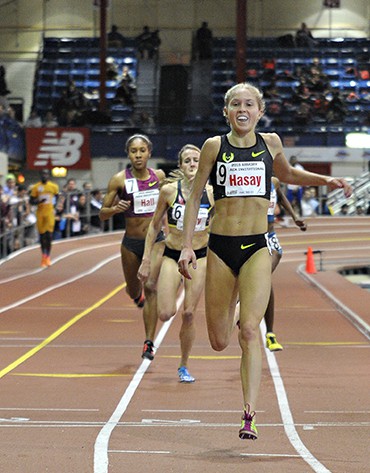 Mary Cain was the cover girl on the meet’s program and was flocked by the media in the interview room after her fifth place finish in the women’s 800m. Cain’s 2:02.75 was a significant indoor PR for her, and the adulation she receives is understandable given the 18-year old is positive, winning with the press, and a fantastic miler. Still, the (slightly) older winner of the race deserves a ton of respect. Ajee Wilson, at 20 years old, is America’s best young 800 meter runner and one of the best in the world. When one reporter asked Wilson about Cain after the race, Wilson patiently explained that there were several other accomplished women in the event to worry about as well. 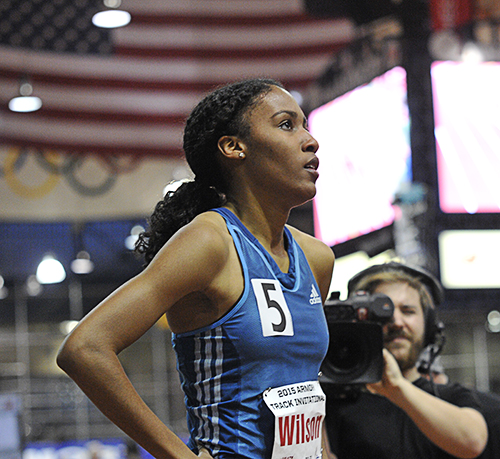 The men’s distance medley was highly touted as a record-breaking attempt, and the U.S. anchor leg Pat Casey received the baton in great shape, having to “only” run a 4:02.5 split in the 1600 to break the old mark of 9:25.97. Ireland’s Ciaran O’Lionaird, nearly four seconds back of Casey when he got the baton, made it exciting for the fans by closing the gap. 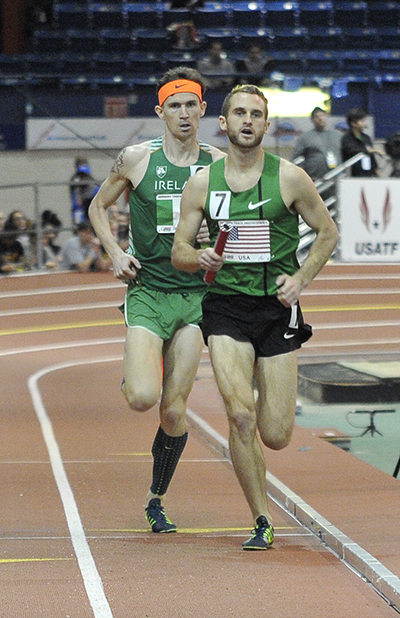 Though it seemed unlikely he’d be able to actually pull off the comeback, O’Lionaird did run a 3:52 at the Wanamaker Mile in 2013, and the mere prospect of such an upset made the world-record setting victory for the U.S., after Casey took off in the last quarter mile and O’Lionaird could not respond, that much sweeter. 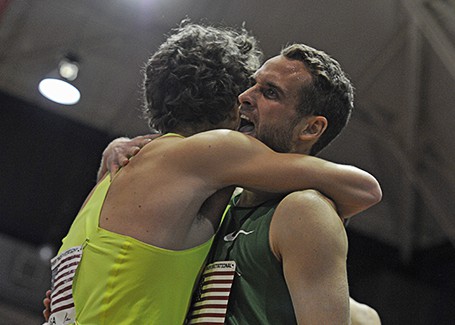 All photos by Sue Pearsall. See our gallery of photos from the Invitational.