Upstaging even the iconic Wanamaker Mile, the Paavo Nurmi 2-mile was the main event for distance running fans at Saturday’s NYRR Millrose Games. Matt Centrowitz, who last year set the Wanamaker Mile record of 3:50.63 en route to his Olympic Gold at 1500m, was moving up in distance, while his strongest competitors, including the Canadian Mo Ahmed and Scotsman Andy Butchart, 4th and 6th at Rio in the 5,000m, respectively, were moving down. Centrowitz said that the absence of rival Nick Willis was a reason for his choice. Having conquered one hill, he was picking a fight on another, and with unrivaled finishing speed he seemed primed to come out on top. 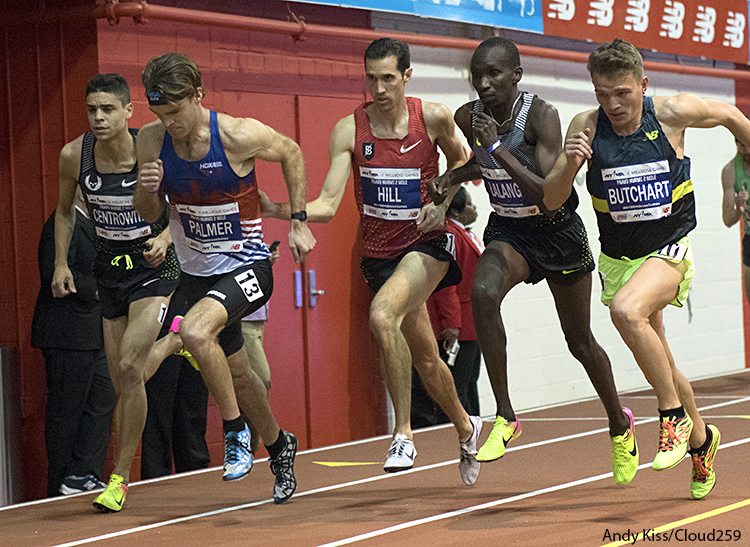 His competitors knew this, of course, and it wouldn’t play to their advantage to do any lollygagging. The pace-setters were Ford Palmer and Lawi Lalang. Mo Ahmed led the charge behind Lalang as the field quickly strung out single file, with Butchart in fourth. After Palmer stepped off the track, Lalang was scheduled to lead until 2400m. In a delicious move, Butchart passed Ahmed and Lalang two laps before Lalang was scheduled to forfeit the lead, forcing the rest of the field to start racing in earnest with 1200m, rather than 800m, to go.

Centro was set adrift as the chase pack was unmoored from the leaders. Butchart however, wasn’t the only one to bring a dagger to this fight. With about 750m to go Ben True worked his way around Centrowitz, among others, and bridged the gap to join the lead group of Butchart, Ryan Hill, and Ahmed. Hill and True (who both fell short in their own attempts to make the U.S. Olympic team for Rio in the 5000) stormed Butchart at the bell, and at this point Hill, who closed in 26 seconds to win the 3,000m at last year’s Millrose, seemed likely to win. But the race had one last surprise. After Hill held the lead down the backstretch, True offered yet another move, accelerating around the final turn and passing Hill midway down the last straightaway to break the tape in 8:11.33 to Hill’s 8:11.56 and Butchart’s 8:12.63 (Centrowitz would finish 7th in 8:21). True ran the last lap in 27.68, Hill in 28.04. 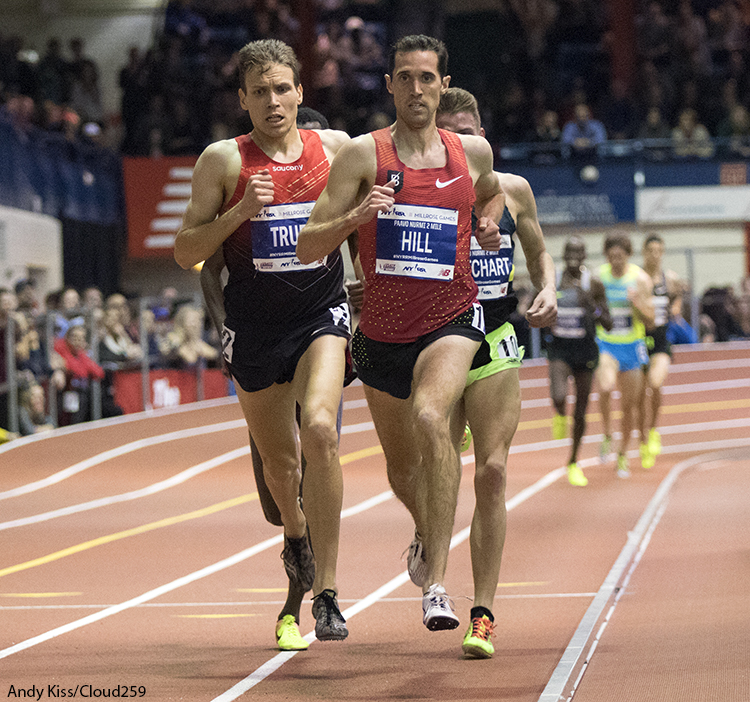 The longest race for the women, 3000m, was a memorable duel between Stephanie Garcia and Canada’s Kate Van Buskirk. Garcia, who specializes in the steeplechase, was the only runner to follow the rabbit Ashley Higginson, and with six laps to go she held a three second lead on Van Buskirk. The gap then shrank until Van Buskirk was on Garcia’s shoulder with three laps left.

“With about 600 to go, I thought, she’s going to beat me. You never want to think that, but I thought if I could just hold on to her and she could drag me though, that would be really great” Van Buskirk said. “I could tell that her arms were getting a little tight. I knew that at some point in that last lap I would have to make a move, but I had to wait that long because she made me wait that long. She was really working for it.” 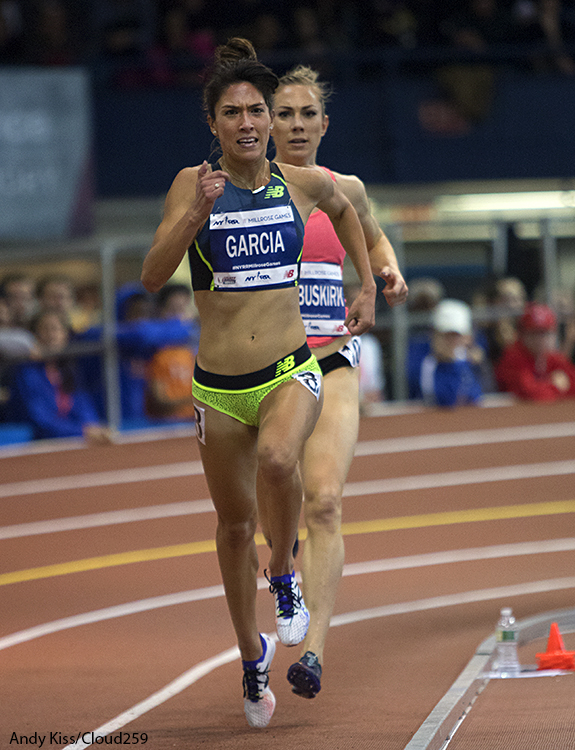 Garcia, for her part, said she “was torn between easing up so I had a little bit to give that last bit, or just push it. I chose more to push, which is why I didn’t have that strong last 50 meters.” Van Buskirk took the lead on the last turn and finished in 8:52.08 to Garcia’s 8:53.48. If one second doesn’t seem like much of a difference, well, the race felt closer than that.

David Torrence seemed to be running his own race in the men’s 1,000m as he sprinted away in the mid three laps of the five lap competition. Brooks teammates Cas Loxsom, who on Jan. 28 set the 600m indoor world record; and Brannon Kidder, who finished a close second to Duane Solomon in the 800m at Millrose last year; put the kibosh on this little fantasy. Kidder dominated the final 200m for the win, with Loxsom second, and Torrence third. 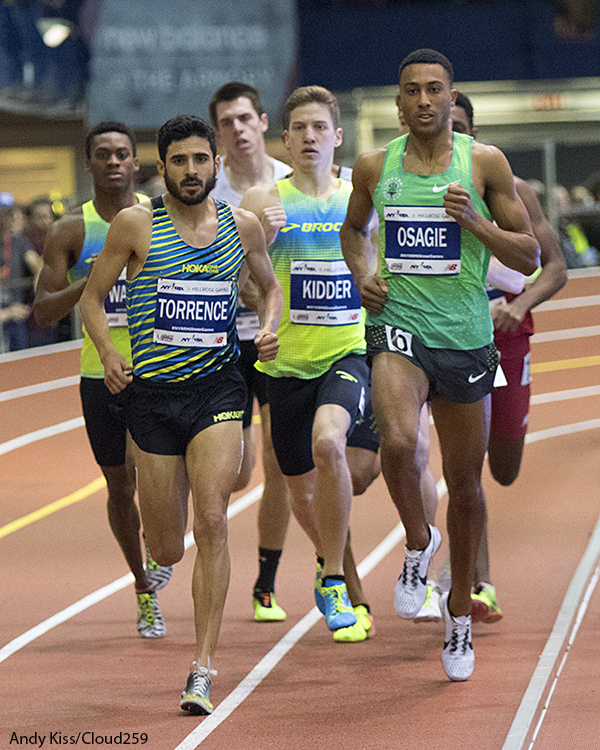 There has been no more dominant performer at Millrose since it moved from Madison Square Garden to the Armory than Ajee Wilson. She won the 800m for a fourth consecutive year, setting an American indoor record with a 1:58.27. 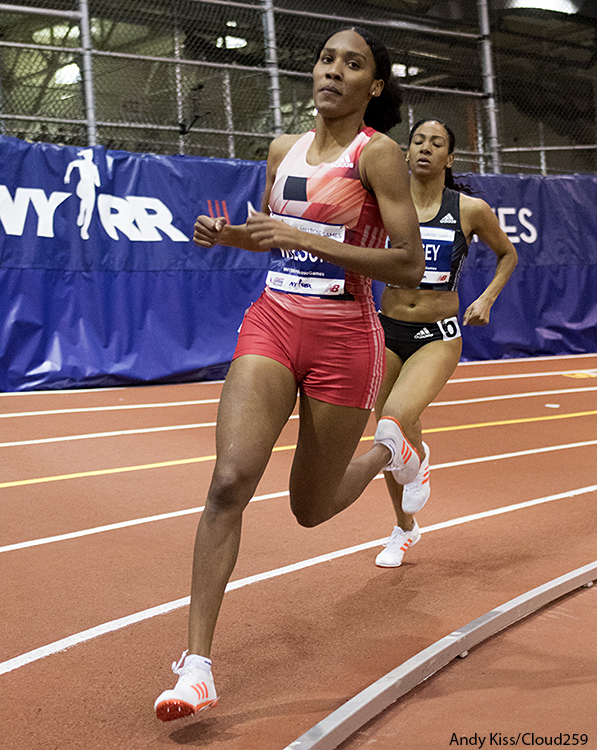 “When I’m older and look back this is going to be a staple in my career that I’m proud of” she said. “I’ve been running at Millrose for a long time. Of course to be under two my first time indoors is incredible.” Spoken like a true veteran, at age 22. Seventeen year-old Samantha Watson finished sixth in 2:01.78, setting the American indoor high school record.

More records were set in the women’s Wanamaker Mile. Shannon Rowbury was the two-time defending champ, running 4:24s in 2015 and 2016. Given her strength over longer distances, she would be expected to tuck in behind the pacer Lauren Wallace. Surprisingly, Rowbury ceded the position to long-limbed Kate Grace, a finalist in the 800m at Rio. 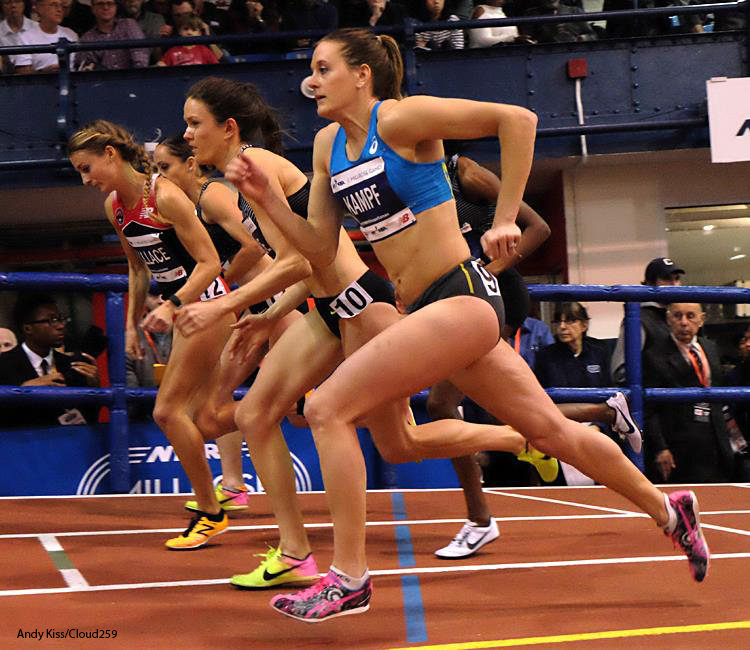 Grace said that “I was pleasantly surprised at first, and then I was like oh no, I don’t want to be rabbit #2 when she drops off.” Wallace and Grace both train with the NorCal distance project and were teammates at Oiselle.

With three laps to go, Sifan Hassan, Rowbury’s teammate on the Nike Oregon Project, breezed by Grace just as Wallace stepped off the track. Rowbury followed Hassan around Grace. Hassan’s elbows flailed wider and wider as she whirled her way to the win. Her time of 4:19.89 was a meet record and a national record for The Netherlands. Grace regrouped and ultimately edged Rowbury for second in 4:22.93. Grace debuted at Millrose with a 4:28 Wanamaker Mile in 2013. 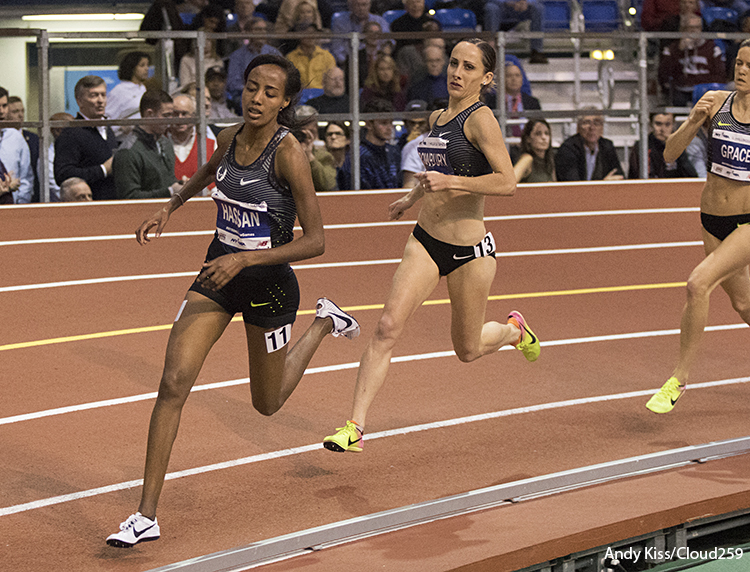 The undercard to the men’s Wanamaker Mile was the Invitational Mile, and the day’s 2nd fastest time came from this heat. Cristian Soratos said post-race “My plan was to get right on the pacer and the second he stepped off to just start cranking.” He did just that, and plans to race the mile at the USA indoor championships at Albuquerque. 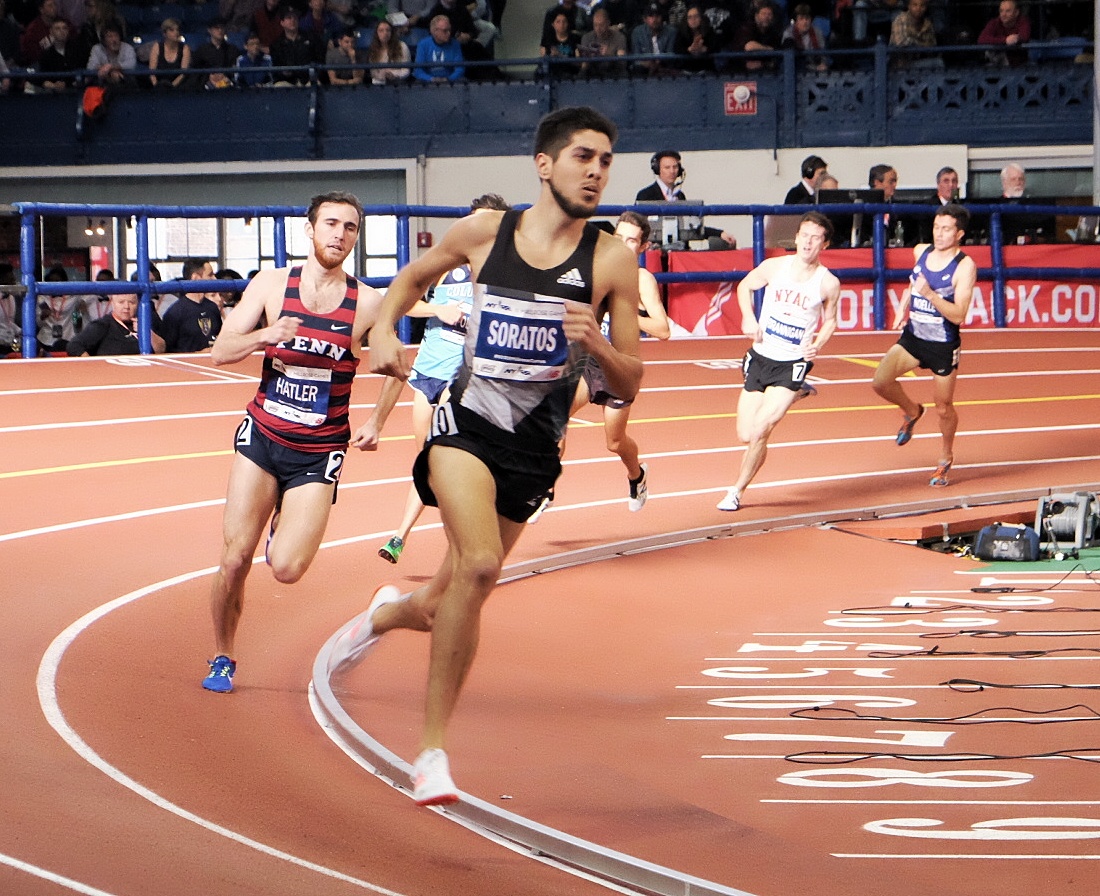 Without Centrowitz or his combatant Nick Willis in the men’s Wanamaker Mile, the race seemed destined to fall to either Olympian Robby Andrews, who won the high school event back in 2009; the Nike Oregon Project’s Eric Jenkins, a 4th place finisher at the US Olympic Trials in the 5,000m; or Olympic bronze medalist in the 800m Clayton Murphy. 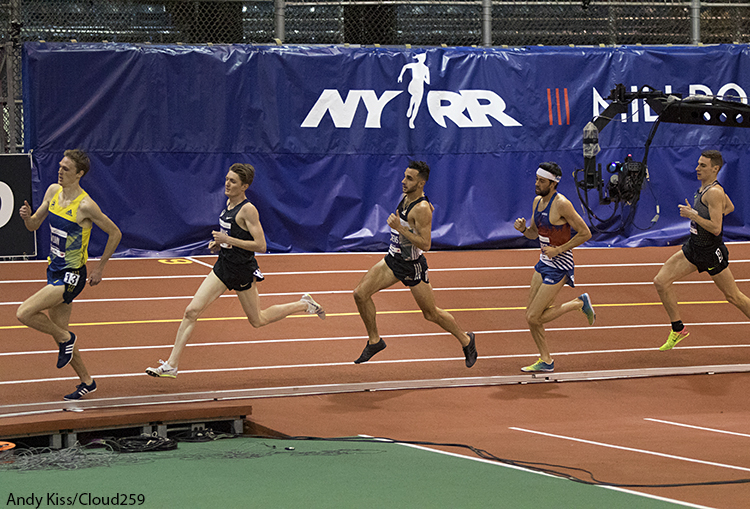 Jenkins, who resembles the carefree, sand splattered character Andrew Lindsay from the opening of “Chariots of Fire,” controlled a relatively uniform race until Kyle Merber made a play for the lead at the bell. Merber won the high school race a year before Andrews had, but in his last attempt in the Wanamaker Mile, in 2015, he finished 11th of 12. 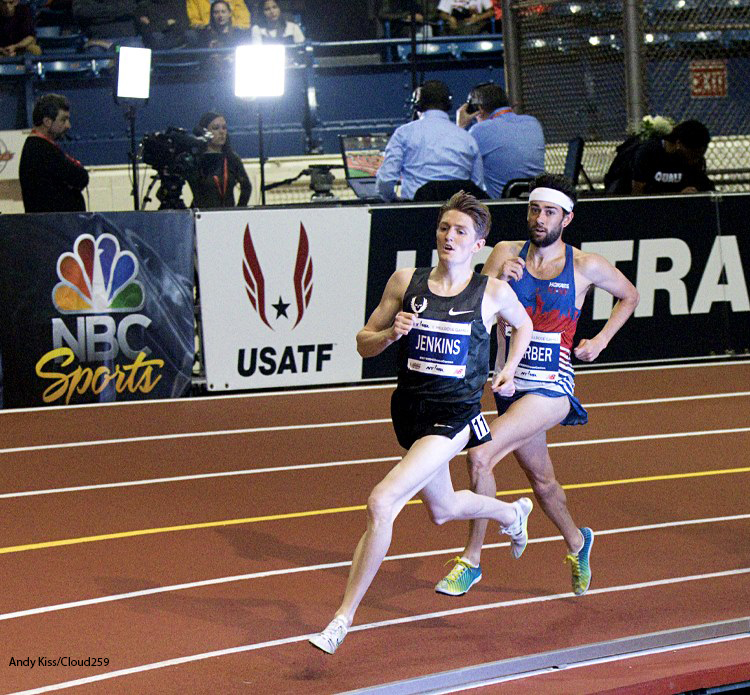 And so it came down to this: Could the slender longshot and Twitter personality @TheRealMerb hold off the rising star from America’s elite distance running squadron? Well, give Merber credit for making the race more dramatic, anyways. Jenkins sprinted back into the lead on the backstretch en route to a 26.9 last lap and a victory in 3:53.23. 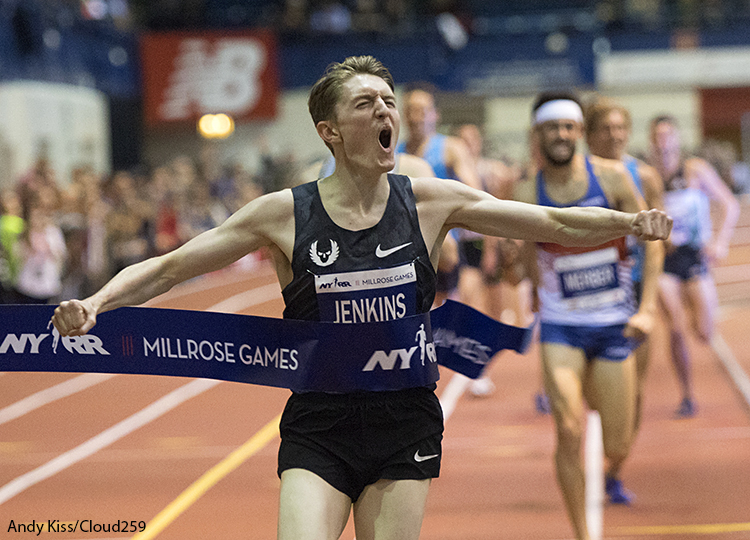 It wasn’t the first time Jenkins had pulled off such a fast finish. He also split a 26 second final lap in the 3,000m at Millrose last year, and he used a lethal kick to sneak past Centro in the 2016 5th Avenue Mile. In future editions of this race, Centro’s stiffest competition may indeed come from his own teammate, who, on this day, had less trouble moving down in distance than Centro had moving up. — Brenn Jones

What did Eric Jenkins and Sifan Hassan do after winning the miles? Post-race workouts, of course (click the link for our extended coverage). See also our complete photo gallery with pictures from Andy Kiss.