In our latest episode we discussed marathon debuts and how much elites typically improve from their first attempt at the distance. Here’s a summary of the data.

We looked at the 10 fastest active U.S. women marathoners and compared their debuts to their personal bests (excluding Renee Baillee who has not yet attempted a second 26.2 miler). The remaining group improved by an average of 8 minutes and 55 seconds. At one extreme, Desiree Linden (née Davila) improved by 22 minutes from her 2:44 opener in Boston 2007. Shalane Flanagan sliced 6 minutes off her 2:28 debut in New York in 2010, and hopes to cut further this fall in Berlin. Kara Goucher had the best American debut of all time with a 2:25 at Boston in 2008, and managed to take another minute off three years later in Boston.

Only one woman in the group has not improved on her debut – Amy Hastings opened with a 2:27:03 in Los Angeles in 2011. Her second best was oh-so-close: only 14 seconds slower at the 2012 Olympic trials.

Among other big names, Paula Radcliffe had an incredible 2:18 debut in London 2001 and still ran 3 minutes faster with her 2:15:24, which stands as the world record by a wide margin. Buzunesh Deba the Ethiopian-born runner who trains in New York, opened with a 2:44 at Quad Cities in 2008, and has chopped 24 minutes off that with her 2:19 at Boston this year.

The evidence of improvement is true of men as well: Ryan Hall, Meb Keflezighi and Dathan Ritzenhein have PRs and average of 4:48 faster than their debuts. 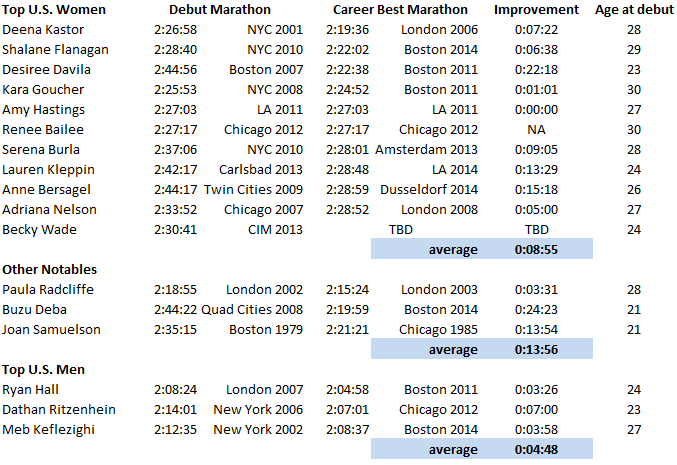