You can take the NYRR Millrose Games out of Madison Square Garden, but you can’t take the star power out of the games. Rod Stewart (or his impersonator) was there as usual, conspicuous in a bright red blazer, as if the hair wasn’t enough. More to the point for track fans, 4-time Olympic gold medalist Allyson Felix was in the house, and she won the 60m dash. Matt Centrowitz again stuck it to 2008 Olympic 1500m silver medalist Nick Willis in the Wanamaker Mile, setting a meet record of 3:50.63. Centro’s Nike Oregon Project teammate Shannon Rowbury repeated in the women’s mile in 4:24.39, nearly identical to her winning time from last year. The Olympic vets are getting fit with Rio on the horizon. 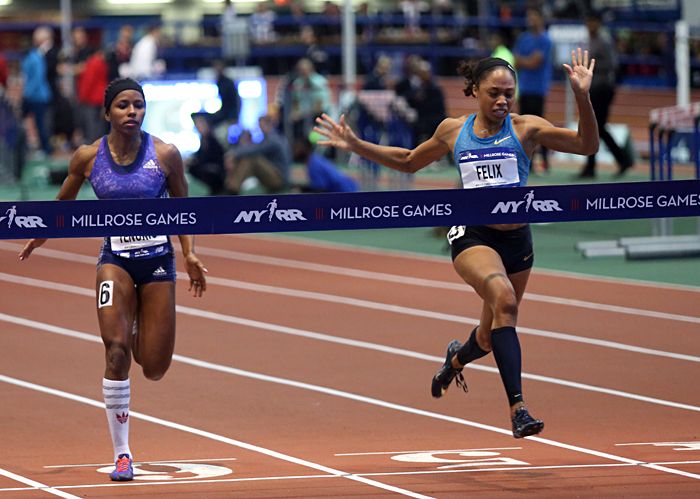 If the 200m and 400m specialist Felix can also blaze at 60m, might her exceptional range tilt the other way as well? What could she run in a 600m, or even an 800m, perhaps? She’s highly unlikely to race those distances in the near term if ever, but wouldn’t it be interesting.

Centrowitz, 26, was 4th at the 1500m in the 2012 Olympics. Record aside, the most surprising thing about this race was his revealing in post-race interviews that he had been fighting off congestion and had even considered scratching. Get out there lad, give it a go, one imagines Alberto Salazar saying. Pop! Meet record, and fourth fastest indoor time ever. Is it too early to predict that Centrowitz, who has won two straight and three total Wanamaker miles, will challenge Bernard Lagat’s records of six and eight? And really, must the NOP trot out these improbable performances amid a drugs investigation? If he stays out of trouble, Centrowitz is winding up for a hell of a career. Poor Willis, who has lost to them both, ran the second fastest mile in the 109-year history of the event on Saturday, and still didn’t win.

The depth and breadth of distance events has improved markedly at the Millrose Games since its relocation in 2012 from MSG to the Armory in Washington Heights. At MSG the lighting was darker, the track tighter, and the times slower. In Lagat’s era the mile was marked by thin fields and an annual sacrifice of Craig Mottram. By contrast, a whopping sixteen sub-4 minute miles were run yesterday, including Drew Hunter’s 3:57.81 high school indoor record. The women’s 5000m was the first in the meet’s history.

The Armory track is fast and the banks steep. Racing there takes getting used to, and a few who came up just short last year—Ryan Hill and Betsy Saina, prevailed this time around. 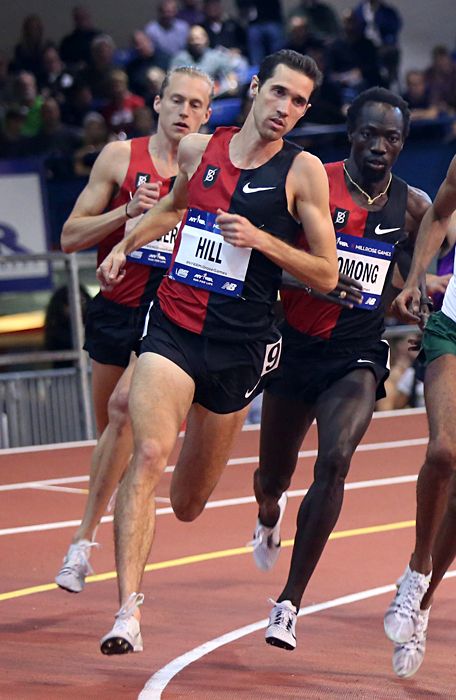 The young guns in this one showed pluck, as 22-year-old Edward Cheserek and his ex-Oregon teammate/rival, the NOP’s Eric Jenkins, 24, led in the early going. Hill, Evan Jager, and Lopez Lomong formed part of a BTC murderer’s row behind them, and somewhere near the back was the NOP’s Cam Levins. It was an orderly procession until Mead (Oregon Track Club) jumped Cheserek with a surprising move with 500m to go and held the lead until Hill got him at the tape. Hill, Mead, and Jenkins (7:39.43) all lit 26 second splits for the last 200 to win, place, and show.

“The second after the race ended last year, I thought yeah, I should have won that had I just raced more confidently. I tried to carry that forward,” Hill said. “I felt very good the whole way today. I did not think it would be that hard to get around Hassan.”

Last year Kenya’s Betsy Saina was outkicked by Sally Kipyego in the 3000m at Millrose. This time it was Saina who prevailed with a late move to beat Molly Huddle by thirteen hundredths of a second. After stalking Huddle the entire race, Saina swung to the lead as she, Huddle, and Emily Infeld passed Jordan Hasay and Liz Costello shortly before the bell. Huddle’s path to the finish on the last lap was obstructed by two of her Saucony teammates, Chelsea Reilly and Laura Thweatt, as Saina darted past them. It was like some video game with Saina dropping obstacles behind her so that Huddle couldn’t catch up.

Emily Infeld, who pipped Huddle at World’s in the 10,000m last year for bronze in a race Huddle would rather forget, finished third in 15 flat. Saina was the eighth place finisher in that same race. She joined the Bowerman Track Club last fall. 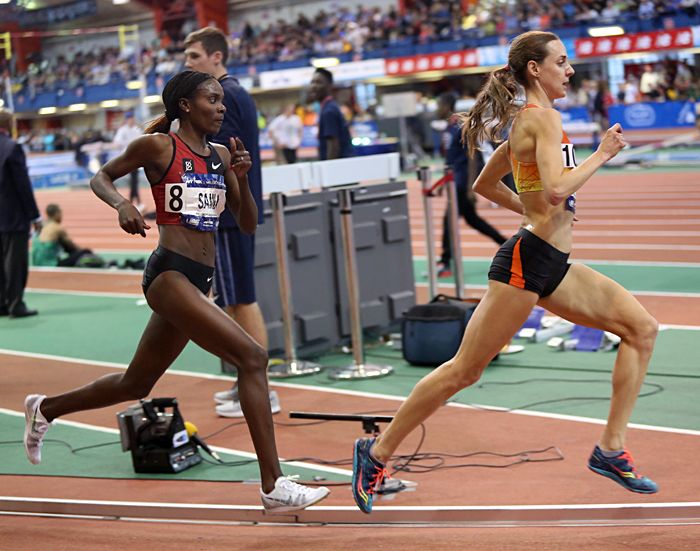 “I wonder if I would [have won had I] pushed a little further out,” said Huddle. “I was kind of just waiting, because I wasn’t confident I could drop someone. If I could have fixed anything, maybe [it would be] getting a better line to the finish.” 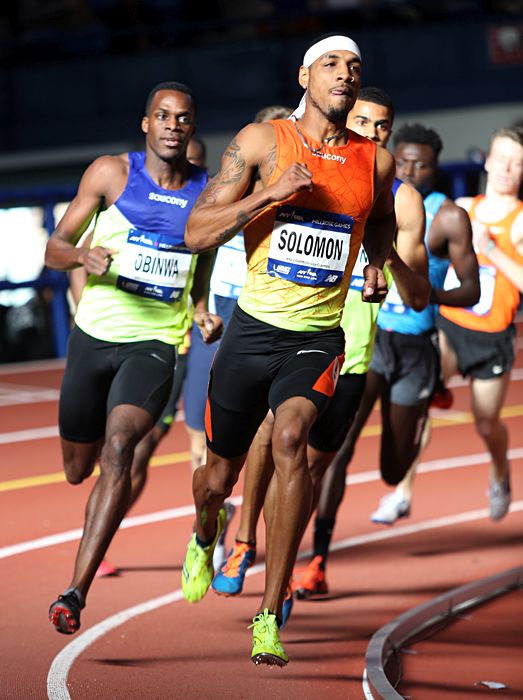 “Being my first 800 [of the season], I wasn’t sure how comfortable I’d be doing my usual race tactics. I held back a little bit. I didn’t want to end up like last year, going out too hard and not being able to finish,” Solomon said.

In the women’s race, Adidas’ Ajee Wilson had another perfectly calibrated performance to win her third consecutive 800m at Millrose. Four years ago, she debuted as a 17-year-old high school student and finished fourth in a race won by Morgan Uceny. 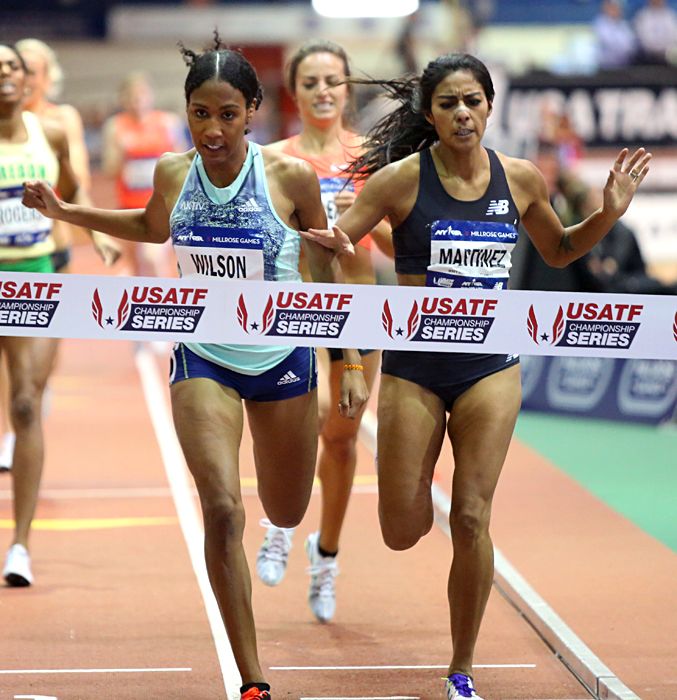 Another predictable result was Rowbury’s victory in the women’s mile, though it wasn’t without intrigue. Rowbury wobbled over the final straightaway last year, winning with a comfortable margin but clearly spent from an attempt at Mary Slaney’s American indoor record. After the pacer dropped halfway through, the gap to the chase pack narrowed. This time, though, there was no wobble, and Rowbury proved once again the class of the field. 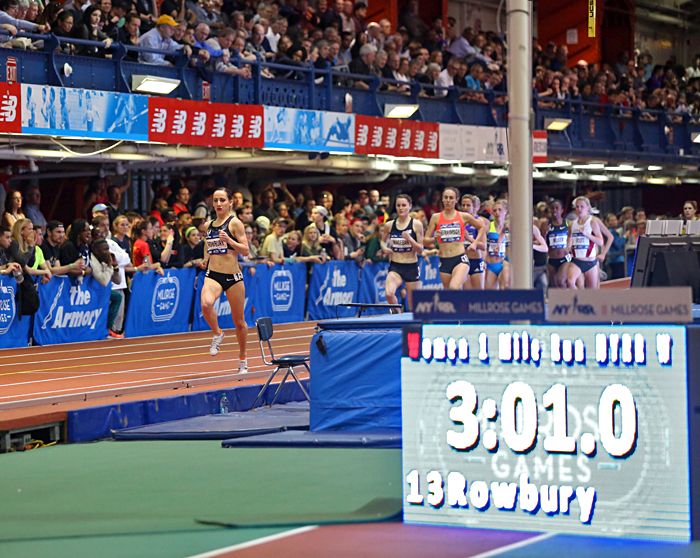 Shannon Rowbury gathers herself for the final push. Photo by Andy Kiss.

In the men’s mile, it was pretty simple. With two laps to go, Nick Willis was exactly where he needed to be. 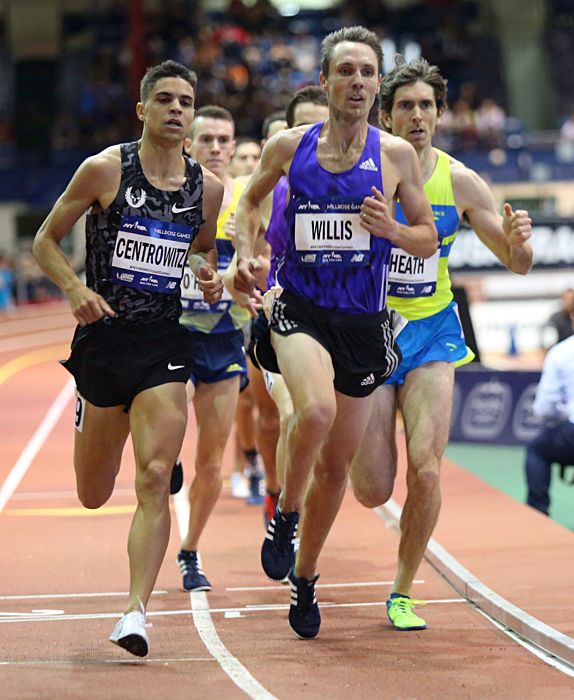 And with one lap to go, Matt Centrowitz was exactly where he needed to be. 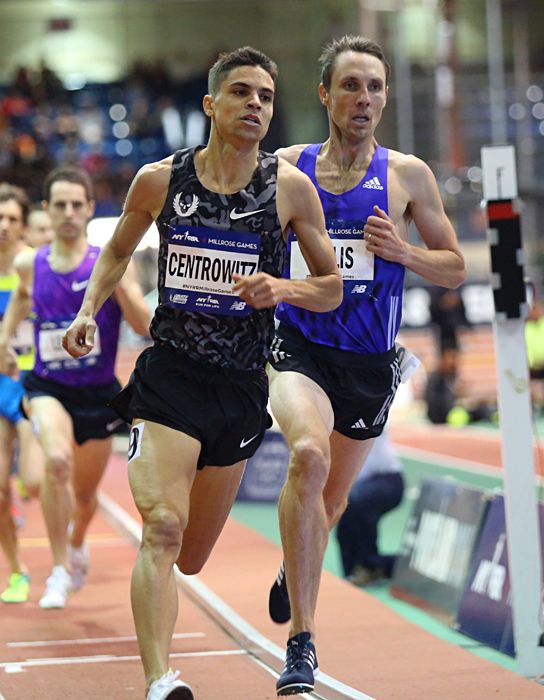 Meet roundup by Brenn Jones. All photos by Andy Kiss.

See our full photo gallery of the 2016 Millrose Games.